[Español] I came across El Sonar de las Mujeres de la Tierra y el Mar in San Cristóbal de las Casas, Chiapas, Mexico, in a store featuring memorabilia of the Zapatista rebellion: tee-shirts, posters, cards but also books, among them this one, pointed out to me by the man behind the counter, Tim Russo. 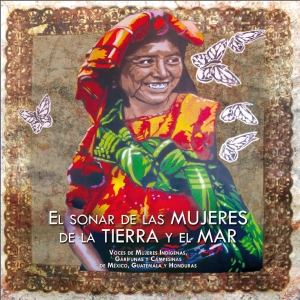 At first glance, the book seemed lit by sunshine – a slim colorful paperback with butterflies swirling around a smiling woman –beautifully designed and full of pictures and poems. Then there was the dedication:

Here I have to confess that what I knew at this point about community radio in Mexico and Central America could fit into one sentence: Yo sabía nada. I knew nothing. I was interested in the book because I was interested in Latin American writers, and here, in this book, apparently, were writers ­– and they were writers who were not accustomed to being writers. I wanted to know more.

I asked Tim if I might meet someone who worked on this book, and a couple of mornings later, while children marched down the street outside in celebration of the Day of Revolution and political crisis gripped Mexico, I sat down in a cafe with Luz Aída Ruíz, who had been on the book’s production team, and a second woman, Medhin (Med) Tewolde Serrano, who had worked on a second book – a manual for women in community radio.

Med arrived in the cafe first, and, putting up with my uncertain Spanish, told me the start of the story of how these books came to be. Tim and Luz (Tim’s partner in life and in work) were covering social movements as journalists when they saw the need for pueblos to have their own media. Some stations and networks of stations already existed, and other communities wanted to start their own stations to defend their land and their human rights and inform their communities about what was happening.

The accompanying process has been “very slow,” Luz said, laughing, as she picked up the story in a mix of English and Spanish when she arrived and joined us for “slow coffee” (the slogan, proclaimed in a sign in English, of our cafe).

“So it all began very very slowly, but we usually have that process of first meeting with the people and working to see what tool would be the most appropriate, because a lot of the communities want their own radio station, but sometimes it may not be the best tool for them because of what their particular needs are or because of what their geography’s like or because of also the – amenazas —(she looked to Med for the English word) — the threats.”

She was not being melodramatic. The website for Reporters without Borders offers a litany of deaths of community radio journalists in the countries represented in El Sonar de Las Mujeres: Mexico, Guatemala, and Honduras.

For many of the eighty women involved in the two-year series of radio workshops that led to the book, the very act of traveling to the place of meeting took courage, even though (because crossing borders can be difficult) they were traveling within their own countries. “Many of the women who were participating in the workshops hadn’t been able to travel,” said Luz. It was, she said, “a very rich experience for all of us.”

The women emerged from the workshops with hours of programming for their stations – and, now, too, with this book, which includes short essays and interviews as well as the poems, which are sometimes in both Spanish and one of the indigenous languages spoken by women in the workshops.

Poetry was made part of the mix, Tim had told me, to increase the women’s self-confidence, but I could see from the poems that it did more than that: it created a space for reflection on what it means now to be women, in these times, in these places – and what it could mean in the future.

There remained no other road to walk

leaving behind the ashes and destruction

the smoke and the dust of evil

But our bare feet always

knew where to go

because the heart was always guiding them….

I fight for my community

so that we may stop being

that give light and then die.

brilliant in the sky.

be put out by nothing or nobody.

Accustomed to thinking of poetry as something written by men “rich, cultured, and white,” the women made it their own. Younger women worked with older women who could not read or write or maybe even speak Spanish, helping them write down or record their poems. “It was very beautiful,” Luz said, “a group and community effort, and intergenerational.”

The young woman who ran the poetry sessions, Emma Shaw Crane, had been a student poet-teacher in Poetry for the People workshops at UC-Berkeley; in Guatemala and Honduras and Mexico she found herself (as she wrote in her report to her funders) “working alongside people living in devastating poverty and multiple levels of intense and ceaseless violence,” which erupted dramatically during the course of the workshops when a coup overturned the elected president of Honduras.

Not surprisingly, behind the sunny facade of the smiling woman, El Sonar de Las Mujeres is full of shadows. Lines of affirmation turn into memories of horror, then circle back to determination:

I dream for my people

we go on developing

we listen to the past and we remember

they raped many women

let this not happen again

let the government respect us

that they let them go out

we reclaimed our rights and

they began to rape us and kill us

we lived on the mountain with hunger

Although there is a hope that El Sonar de las Mujeres will find a larger audience, it was published with the support of foreign funders primarily as a gift for the women themselves. Its status as a gift is reflected in the beauty of the design. White paper would have been easier,  but the color they chose ­– cream – went better with the tint of the photographs and illustrations: a soft brown, the color of the earth where we came from, the color of the women whose words appear on these pages – including, eerily, Bety Cariño, interviewed the year before her death.

“In the moment of the assassination of our compañeras,” she said, parents were saying, “’Why are you going, my daughter? They are going to kill you.’”

She herself, along with a human rights observer from Finland, died in a paramilitary attack not long after the workshops ended. Her killers, like the killers of the two other women to whom the book is dedicated, have never been brought to justice. – December 2014

Use the form below to write to Carol Polsgrove, Medhin Tewolde Serrano, or Luz Aída Ruíz.